Which outfit do you prefer? 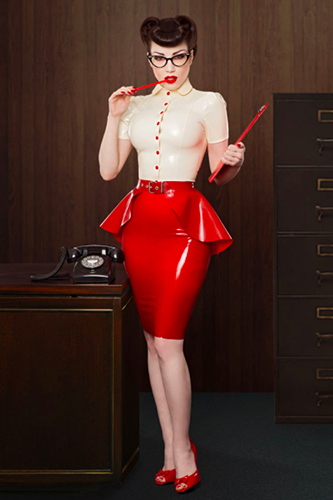 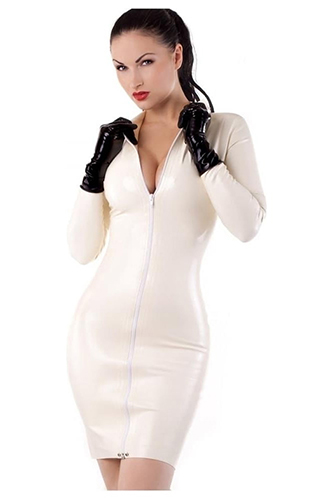 It’s been just 1 week since I started my new job in an office with 7 other women and a middle aged male boss. I’ve already worked out how they all view me: 6 of the younger girls don’t appear to like me, I’m pretty sure it’s jealousy. I’m mid twenties, very attractive with magnificent tits and shapely legs so I understand their envy. The other woman, Amanda, is in her 50’s I’d guess, still very attractive now with large firm breasts, I bet she was an absolute stunner when she was my age. I think this is why she seems to have taken me under her wing; I remind her of her younger self. 1 of the reasons why the other girls might have an issue with me is that I am not afraid to flaunt my good looks and my great figure. My dress sense leave little to the imagination, low cut tops & very short skirts being my work attire of choice. The fact that my ample bosom & trim thighs are generally on show has also caught the attention of my manager Mr. Brown who cannot keep his eyes off them. I shouldn’t really wear a thong with skirts that short but I just prefer them to briefs. I’m fully aware that my peachy arse has been displayed for all to see many times when I am getting files from 1 of the bottom drawers in the office. I’d be lying if I said it didn’t give me a sexual thrill knowing that my body is being looked at with envy by some and lustful intentions by at least 1, more likely 2 of my colleagues.

Mr Brown was often visually aroused after he’d spent a few minutes staring up my skirt when I was sitting at my desk just in front of him. He often left the office for 5 minutes when that happened & when he returned that bulge in his trousers had disappeared. I wonder? My decision to wear my favourite PVC tight mini dress to the office 1 day was probably over the top but it certainly had the other girls talking & shaking their heads in disbelief, Amanda unable to take her eyes off me & old Mr Brown with a permanent hard on very prominent in jeans far too tight for a man of his age & stature. This dress however lead him to take his infatuation with my body too far. He took every opportunity to rub up against me, I could feel his hardness against my arse through the tight pink PVC and twice his forearm brushed across my cleavage. Enough was enough, he needed to be taught that you can look but not touch.

Not wanting to go it alone I confided in Amanda (if I’d mentioned anything to the others I’m sure they’ll have said I was asking for it) and she was only too happy to help me plot revenge. I sensed that she wanted me as much as Mr Brown did, something that appealed to me as well if I’m being honest. We concocted a plan that would have Mr Brown right where we wanted him & we were going to have plenty of fun as well:

That afternoon I asked him if we could have a quick private chat later when everyone has left which he obviously agreed to. Once everyone had left for the evening we were both sat at our desks & I just came right out & asked him “Mr Brown, have you ever gone to the bathroom to wank after staring up my skirt? … He was speechless! Stuttering & struggling to know what to say or do. I  explained that he had nothing to be embarrassed about, after all, we all like to masturbate when we are turned on don’t we? I then made it obvious that my hand was making its way towards my pussy, beneath the desk. He gasped and grabbed his crotch whilst I pulled my knickers aside so that I could touch my pussy. The sheer excitement of the situation had made me moist so my finger slipped inside me quite easily. Mr Brown knew exactly what I was doing even though the desk was obscuring his vision. All he knew was that a gorgeous younger woman, dressed in a sexy pink PVC mini dress which bolstered her beautiful heaving chest was playing with herself 10 meters away from him. Just to prove a point, I lifted my hand away from my pussy so that I could seductively put a finger in my mouth before returning it to where I needed, no actually wanted, it to be. He instinctively stood up and unfastened his belt, his rock hard cock immediately visible even before he lowered is trousers and boxers and started wanking, slowly at 1st. Believe me I am now genuinely turned on and am giving my pussy some serious finger action. When he started wanking faster I shouted for him to slow down as I didn’t want it all over before I had orgasmed. I had not expected to be enjoying this but the combination of the power I was exerting over my boss & the thought of what was to come had made me super horny.

As I started shuddering to an orgasm I ordered him to speed up, he didn’t need telling twice as his wanking became furious and he came heavily all over his desk, 1 spurt reached his computer keyboard, good luck with cleaning that Mr Brown. It was at this point, as he was still recovering, his dripping cock still twitching in his hand, that the door bursts open & in walks Amanda. She stops as soon as she is in the room, looking & laughing at the state of this man trying desperately to cover up and hide what had just happened but he knew really that it was pointless. All he achieved was to get spunk all over his trousers as he tried pulling them up in a hurry. Whatever will Mrs Brown make of those white stains all over the crotch of his navy jeans? What he was not banking on though was that Amanda was not surprised by what she had walked in on. She calmly told him to stay there with his cock out as she walked to her desk & retrieved her conveniently placed iPad that had been video recording him the whole time. Notice that I said recording “him”. At no time did I appear on the video, it was just him, 1st rubbing himself through his jeans, then undoing them, taking his erect cock out and wanking until he came all over his desk, papers and keyboard. Explain that to the company owners and your family Mr Brown!

Now for some fun. Despite his protestations, he knew that we had him and that his whole career and dignity lay inside Amanda’s iPad. So, when Amanda ordered him to strip naked he did so without hesitation, his flaccid dribbling cock just hanging there looking nearly as sad as his face. Amanda ordered him to kneel down with his hands on his head, an order that he meekly followed. We then explained to him that his behaviour towards me had been unacceptable. We should all know by now that if women want to dress to suit their own tastes, no matter how much flesh is displayed, this is not an invitation for deviants like him to ogle, touch them or pleasure himself over. This is a lesson that he will never be allowed to forget. Amanda had brought a bag of goodies with her & the next hour was going to be the most humiliating & painful that Mr Brown could imagine……but tremendous fun for us!

Next week, I will tell you exactly how Amanda, myself and our terrified manager spent the next part of the evening & even give you a hint as to wonderful situations are going to follow in the days after that.

Disclaimer: This was a consensual fantasy roleplay, known as Consensual Non–Consent (CNC).